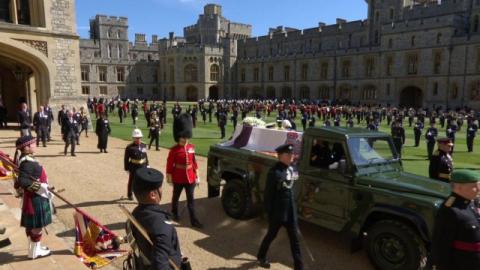 The service, which is being broadcast on BBC One, followed a national minute's silence.

The duke's children walked behind his coffin in the funeral procession.

Princess Anne and Prince Charles made up the front row, followed by Prince Edward and Prince Andrew.

In the third row, Prince William and Prince Harry walked either side of their cousin Peter Phillips.

More than 730 members of the armed forces are taking part in the event, but there is a limit of 30 mourners inside St George's Chapel, under Covid rules.

His coffin was carried the short distance to St George's Chapel on a modified Land Rover, which the duke himself helped to design.

The funeral procession from the castle to the chapel was headed by the Band of the Grenadier Guards, the Major General's party, and military service chiefs.

The Queen, 94, travelled with a lady-in-waiting in the state Bentley at the end of the procession.

A Royal Marines bearer party carried the coffin into the service.

A reduced choir of four singers is included but the congregation will not be singing, in line with coronavirus restrictions.

Buglers of the Royal Marines sounded Action Stations - a signal that all hands should be ready for battle - as the coffin was lowered into the Royal Vault.

A ceremonial gun fire at nine locations across the UK, and in Gibraltar, marked the...