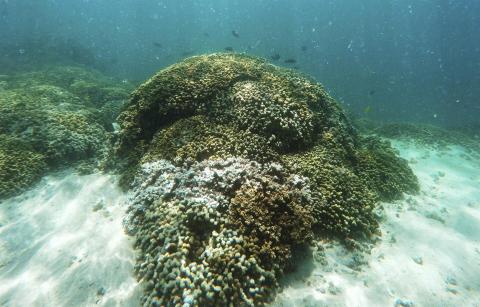 As muddy rainwater surged from Hawaii's steep seaside mountains and inundated residential communities last month, the damage caused by flooding was obvious: Houses were destroyed and businesses swamped, landslides covered highways and raging rivers and streams were clogged with debris.

"These big events are the ones that have the greatest damage because they are the ones that put the most sediment and nutrients out onto the reef," said C. Mark Eakin, senior coral advisor to the National Oceanic and Atmospheric Administration and the former director of the agency's Coral Reef Watch program.

"Given this climate change or global warming, as we have seen over the last hundred years, the atmospheric water vapor pressure is increasing," said Chu. "We have some evidence showing that we already have some increasing, very intense rain."

Coral reefs make up much of Hawaii's nearshore ocean ecosystem and are critical to the state's economy.

Adding tourism, fishing, cultural value and other factors, the state's reefs are worth more than $33 billion, according to a NOAA-funded study.

March's flooding was caused by a...