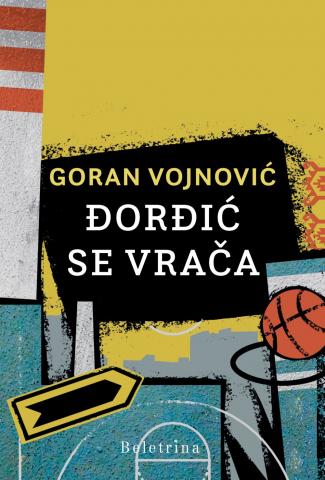 Ljubljana – Goran Vojnović has written a sequel to his bestselling debut novel Čefurji Raus! after 13 years. Đorđić se Vrača (Đorđić Returns) is no longer a story about Slovenians and immigrants from the former Yugoslavia and their children, but about a world that is disappearing.

Commenting on the book and the context in which it was written, Vojnović said that the epidemic is not a topic of the novel, but he does express his discontent through the book.

He said the world has “taken a wrong course”, and everyone is crushed to atoms, “regardless of nationality, belief or religion it is easy to feel eradicated”, which is how the main protagonist, Marko, feels when he returns to the Fužine borough in Ljubljana, where he grew up, after living in Bosnia for more then ten years.

But the book is no longer about relations between Slovenians and immigrants from the former Yugoslavia and their children, an issue that was prominent 15, 20 years ago. “The epidemic has actually made these differences between us very clear, separating us from one another …”

Now, everyone is jeopardised in some way, health-wise or materially, he said. “It’s just a radicalisation of a process that was under way before but now that we are physically separated it has become more clear and obvious.”

Vojnović, who has written two more novels since Čefurji Raus and won the Kresnik Prize for the novel of the year for all three of them, said he had always allowed for the possibility of a sequel to his debut novel.

At first he thought he would write a “kind of satire, something between literature and journalism, a half-novel, a social critique, more entertaining than serious”, but what he came up with was something “very serious” told in a humorous way.

In the original novel Marko Đorđić is a “wild, innocent boy, easily lovable, because he combined a rawness of his surroundings with his sensitivity”, the new book shows what happens to such a person after ten years of living in a place that is marked by trauma, pain, poverty and divisions on all levels.

The book also explores Bosnia today, its decay and ghost villages. The process of ethic cleansing, which started during the war in 1990s, has never ended, Vojnović said. “It’s like cancer that is spreading. Dayton was a very aggressive chemotherapy that has slowed down the process somewhat, but then it continued and it still continues today.”

Wherever there is a notable ethic majority, be it Serbian, Muslim or Croatian, it slowly consumes all minorities around, he said.

The video interview was released on the website of the publisher Beletrina.

The post One of Slovenia’s bestselling books gets sequel appeared first on Slovenia Times.