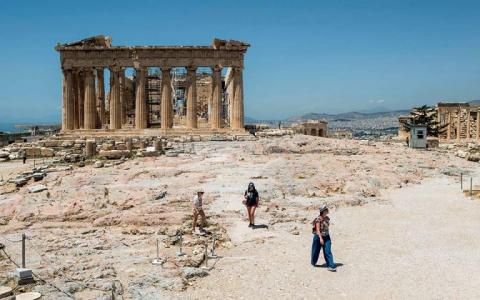 Greece began opening to tourists today with few bookings but hopes for a better season to help make up for a 2020 devastated by the coronavirus pandemic.

On Rhodes, where most visitors are from abroad, hoteliers are scrubbing, polishing and painting in anticipation of a make-or-break year.

"We're preparing the hotel in order to start as soon as the government gives us the green light," said George Tselios, general manager of Sun Beach Hotel, whose customers are from Scandinavia, Germany, Austria and Britain.

Greece will formally open on 14 May but starting today, tourists from the European Union, the United States, Britain, Serbia, Israel and the United Arab Emirates will not quarantine if they are vaccinated or test negative for COVID-19.

Tourism, which generates a fifth of Greece's GDP and one in five jobs, is vital for an economy which had climbed out of a decade-long slump only to slip back into recession last year as COVID-19 struck.

In a normal year, Rhodes would have already laid out the umbrellas for a season that runs from March through October. In mid-April, it resembled a ghost city.

Many have been closed since 2020, when just 7.4 million people visited Greece, fewer than any year in its decade-long economic crisis and down from a record 31.3 million in 2019.

From hotels to restaurants and daily cruise boats, the many businesses surviving on state aid cannot afford another lost summer.

"Most of them feel the country cannot survive another crisis," Rhodes's deputy mayor for tourism, Konstantinos Taraslias, said.

Slovenia to play for bronze after losing to France