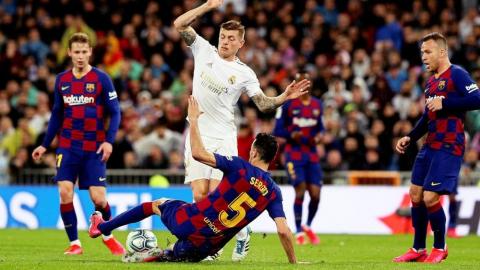 On Sunday, 12 of Europe's largest clubs - six English, three Italian and three Spanish - announced the formation of the breakaway competition, to be funded by American banks and businessmen, and administered by the clubs themselves. It will be a midweek competition to rival the existing Champions League, and will have 15 "founding clubs" plus a further five teams that can qualify annually based on achievements in the prior season.

The other three clubs will be decided "ahead of the inaugural season, which is intended to commence as soon as practicable", the statement said, though German clubs - principally Bayern Munich and Borussia Dortmund - and Paris Saint-Germain have already stated their intention not to join the breakaway league.

Florentino Perez, Real Madrid president and the first chairman of the Super League, said: "We will help football at every level and take it to its rightful place in the world." However, few doubt that the plans are anything other than an attempt by the elite clubs to grab a larger share of the revenue from the game for themselves - it is estimated they will get more than three times as much money a season as they get currently from the Champions League.

The condemnation of the clubs' plans has been swift, harsh and widespread. In a joint statement, UEFA and Europe's top national leagues called it a "cynical project… that is founded on the self-interest of a few clubs at a time when society needs solidarity more than ever" and reiterated that football is based on ...