Ahead of his virtual climate summit, Biden pressured by activists to act swiftly 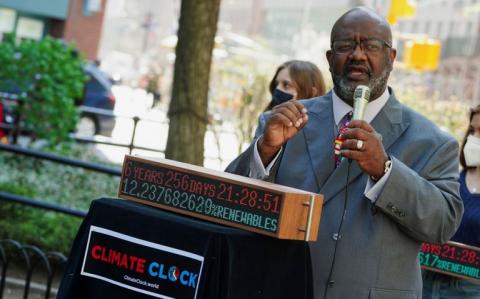 Climate activists rallied in New York's Union Square on Monday with a message for the Biden administration: Time is running out, but it is not too late.

Along with demands to end fossil fuel reliance, activist leaders unveiled an addition to the digital «climate clock» displayed on a building above the square since September.

The clock now shows the amount of the world's energy supplied from renewable sources, currently at 12% and slowly rising. A timer counts down the years, days and seconds that scientists estimate are left to reach net zero carbon emissions and avoid the most catastrophic effects of climate change.

«If we just have the deadline, that's really focused on doomsday, and it can make people feel hopeless. People need to be reminded there's so much they can do in terms of taking action,» said Alexandria Villasenor, a leader in the youth climate movement and one of several speakers at Monday's event.

The event was part of a week of civic action aiming to pressure world leaders ahead of President Joe Biden's virtual climate summit on 22-23 April.

Masked and outdoors, speakers shared stories of how their own communities had been hurt by climate-induced disasters.

After the event, Villasenor and her father began an electric car drive from New York to Washington to deliver a portable version of the climate clock to top Biden officials. Other handheld clocks will be given to...