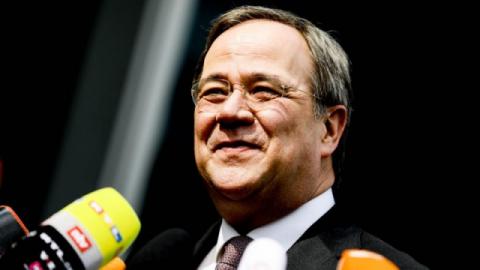 The leadership of Angela Merkel's Christian Democratic Union (CDU) has backed its head Armin Laschet as the conservative bloc's candidate for chancellor in the upcoming German federal elections, dpa reported.

Laschet was backed by 31 CDU national board members and nine voted for his rival Markus Soeder, head of the CDU's Bavarian sister party, the Christian Social Union (CSU), a party spokesman announced early Tuesday. There were six abstentions in the late Monday vote after more than six hours of deliberation.

Together, the CDU/CSU conservative bloc - which is currently in coalition government with the Social Democrats (SPD) - traditionally chooses a single candidate for chancellor.

But this year, the head of each party put themselves forward for the job.

Laschet earlier on Monday said he would propose a way out of the deadlock at the meeting and that he hoped for a final decision "very quickly, this week." He invited Soeder to the online gathering.

Soeder said it was up to the much larger CDU to decide on the way forward after days of deadlock.

"We as the CSU and also myself will respect whatever decision is taken," he said, emphasizing that it was time to come to a decision.

Germany's centre-right alliance is the largest bloc in parliament, and, despite sliding poll numbers, Merkel's successor is still likely to come from its ranks when the country votes in September.

Laschet has the support of senior CDU party figures, while Soeder has maintained the loyalty of his CSU. Laschet, however, has low national poll ratings compared to Soeder, and CDU lawmakers fear losing more seats in parliament at election time. Influential members of the bloc have put pressure on the two candidates to end the bickering.