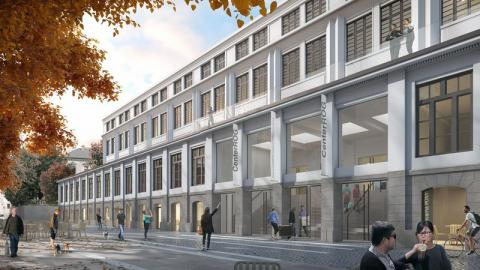 Ljubljana – The Ljubljana city council endorsed on Monday the decree founding the public institute Rog Centre that is to be set up in the defunct Ljubljana bicycle factory Rog. This comes after an autonomous social and cultural community was evicted from the premises in January.

In line with the decree, Rog will become an interdisciplinary and multicultural public creative and production centre after renovation.

The municipality published a tender for renovation and construction of the premises at the end of March. The value of the project has not been disclosed yet and the bids are to be reviewed on Friday.

The centre is to house more than 500 artists and creative groups at more than 8,000 square metres, according to the municipality. It will also feature 20 new production halls that will be available for short- or long-term use to different production groups.

According to head of the municipality’s culture department Mateja Demšič, the new centre will be a place of networking and cooperation of all those active in the culture and creative sectors, with a special emphasis on architecture and design, visual arts, and new technologies.

She said the municipality had decided to set up the new public institute because no other existing public institute or non-governmental initiative had been found in the Ljubljana area that would match the centre’s programme and could take over the management of the real estate.

In today’s debate, Milan Jakopovič from the Left was bothered by the fact that only one year of managerial experience is required for director while so far at least three years of experience had been required for similar posts.

He said that founding the public institute so quickly showed that the municipality did not want a debate on what should be created in the Rog premises, which was why the party did not support the new centre.

Katja Damij from the LMŠ party said they supported the project but wondered whether a new public institution indeed had to be founded. She also pointed to a lack of strategy and vision, which was echoed by Dragan Matić from the SMC.

Igor Horvat (SDS) welcomed the fact that the defunct factory would be renovated but said a representative of the Culture Ministry should be in the board.

Mojca Sojar (NSi) wondered whether former Rog residents would be able to return to the premises after renovation.

Mayor Zoran Janković said no existing public institute had been found that would be able to cover all the fields envisaged in the centre. He said the director would draw up a strategic document for the centre.

As for the one-year of managerial experience criterion for the director he said this had been introduced to give priority to young candidates.

He said former Rog residents who would meet the criteria for joining the centre would be able to return.

Before the session, members of the Rog autonomous community held a press conference in front of the Town Hall, stressing that a broad debate would be required on what kind of a centre should be set up at Rog.

The community also said that the municipality had not yet presented any documents that would be the basis for their eviction.

The squatters were forcefully removed from the Rog premises on 19 January as the Ljubljana city authorities launched construction work on the site. Police had to intervene.