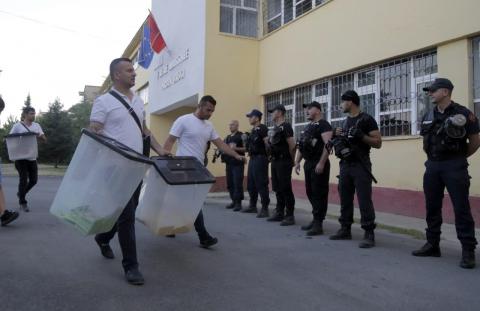 Tensions rose in the run-up to the weekend's polls in Albania when a young man was shot in his knee inside the electoral office of the opposition Democratic Party in the central Albania town of Kavaja late on Monday.

The Democratic Party said it was an attack on the party itself, but Prime Minister Edi Rama, head of the ruling Socialist Party, said that the incident was being used for political ends.

President Ilir Meta went to the scene of the shooting during the night and then visited the victim in the hospital in Durres, where he is receiving treatment.

The state police said in a statement that the assailant is still at large and being sought by officers.

Democratic Party leader Lulzim Basha told an electoral meeting in Kavaja on Tuesday that Rama was to blame for "the attack on the secretary of the Democratic Party inside [the party's] office".

Basha said that the Democratic Party would not be discouraged by the "cowardly attack".

Rama reacted on Twitter, writing that the Kavaja shooting "was not politically motivated".

"It is quite clear that the event in Kavaja has no political motive! The person who did it has nothing to do with the Socialist Party, on the contrary, he is a Democratic Party activist. The Democratic Party is not to blame for the event but for the scandalous politicisation," Rama wrote.

In a separate incident in the city of Berat on Monday evening, a Democratic Party filmed what he said was a van containing state aid packages which he claimed that the Berat municipality was giving to poor families in order to buy their votes for...