Well tests to start in May in Turkey's Sakarya Gas Field 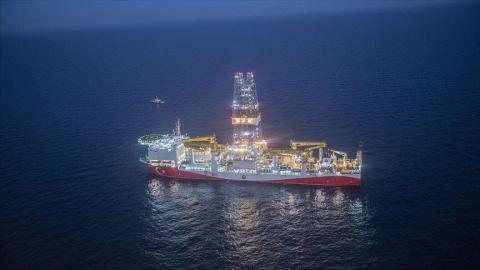 Turkey's well tests for three wells in the offshore Sakarya Gas Field in the Black Sea are set to begin in May, the first of which will begin in the Türkali-2 well, Energy and Natural Resources Minister Fatih Dönmez said on April 20.

Speaking at the National Technologies for Petroleum Industry meeting (PEMT'21) through video link, Dönmez said that the field teams are working hard to ensure that the first Black Sea gas will be ready in 2023.

While field development and production continues in the Sakarya field, one of Turkey's drilling fleet vessels, Kanuni, will hold well tests in the Tuna-1, Türkali-1 and Türkali-2 wells, which were drilled by Turkey's first drillship, Fatih.

Turkey's natural gas discovery of 405 billion cubic meters in the Black Sea last year was the largest ever in its history, and the biggest offshore gas find globally in 2020.

Turkey meets the majority of its natural gas needs through imports. The discovery is expected to reduce Turkey's gas import bill, which totals around $12 billion annually.

Turkey produces 186.5 million liras worth of oil and gas equipment

Dönmez stressed the need to "make energy technologies the new defense industry of Turkey" towards the country's goal of energy independence.

With this goal, Turkey produced 186.5 million Turkish liras worth of oil and gas equipment over the past three years, he said.

"If we had not produced this equipment locally, we would have to pay the equivalent in import costs of 263.5 million Turkish liras," he explained.

Through localization, he said 41 percent savings, equating to...