A ‘Greying’ Western Balkans Must Look to Robots 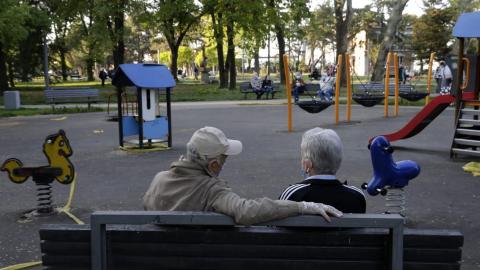 Those who remain are mainly younger retirees, or people waiting to retire, whose children have moved to Belgrade or abroad, ending the traditional system of inter-generational solidarity in family care. The youngest is 35 years old. Recently, the oldest dweller passed away at the age of 90; her carers at the end were also pensioners. It has become a regular routine for residents to complain about their grey future due to the absence of people to care for them.

Women wearing face masks sit in a tram in the midst of the COVID-19 coronavirus pandemic, in Sarajevo, Bosnia and Herzegovina, 2021. Photo: EPA-EFE/FEHIM DEMIRPhoto caption

Such trends are affecting the whole of Europe, not just Southeast Europe, although the countries of this region feel a greater impact due to some of the lowest birth rates in the world, little immigration, and mass emigration.

Research done by The International Institute for Applied Systems Analysis, IIASA, and the Wittgenstein Centre for the European Commission, using a shared socioeconomics pathways methodology, says Bosnia and Herzegovina could become the country with the oldest population in the world by 2060, when it is predicted that 63 per cent of the people will be over 65.

Other countries in the region may follow a similar pattern.

The aging of the population has serious economic and social consequences, reflected mainly in the constant increases in pension payments.

Governments in the region are responding to this by tightening the conditions and increasing the age limit for retirement. Serbia has imposed the toughest measures since 2014, so reducing the number of pensioners from 2015.