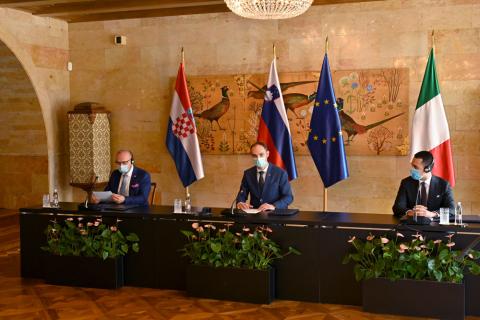 Brdo pri Kranju – Slovenian Foreign Minister Anže Logar and his Italian and Croatian counterparts, Luigi di Maio and Gordan Grlić Radman, signed in Brdo pri Kranju on Wednesday a joint statement on trilateral cooperation in the northern Adriatic. The document is the foundation for strengthening cooperation in areas that are key for all three countries, Logar said.

The Slovenian minister said he was pleased as the first stage of cooperation of the three countries in the Adriatic Sea had been wrapped up today.

“Having signed the joint declaration, we set up the foundation for strengthening cooperation in all areas that are key for all the three countries,” he said at a press conference that followed the signing.

The three ministers got acquainted with concrete proposals for cooperation as drafted by task forces in interoperability. The ministers called for, among other things, boosted cooperation between the northern Adriatic ports and joint promotion of the Adriatic navigable waterway.

“The Adriatic Sea as a semi-enclosed sea with dense maritime traffic and a sensitive ecosystem requires close cooperation between all the three coastal countries,” said Logar, who is optimistic about further cooperation.

Logar said today that while the document had been hashed out, all open issues that had been raised had been resolved. He described today’s meeting as a great accomplishment for diplomatic services of the three countries.

At today’s meeting Logar said that a special emphasis had been put by Slovenia on exercising the country’s rights in the areas of exclusive economic zones in the Adriatic in line with international maritime law, reads a press release by the Foreign Ministry.

He is pleased that in the run-up to the meeting certain international law issues regarding exclusive zones were addressed such as freedom to hold military drills. Croatia and Italy assured Slovenia that the regulation would remain the same as under the regime of the high seas, meaning high seas freedoms would still be recognised in exclusive zones.

When it comes to fishing, the common fisheries policy will apply, meaning exclusive zones will be the EU’s fishing area, the ministry said.

The joint statement, signed today, highlights commitment by Adriatic coastal countries to cooperation under the UN convention on the law of the sea, other international instruments regarding conservation, pollution prevention, sea rescue, and EU law, particularly in terms of the bloc’s fishery policy and strategy for the Adriatic-Ionian region.

The statement envisages setting up a scheme for sustainable trilateral cooperation by forming task forces to focus on interoperability, maritime security, the blue economy and environmental protection.

Di Maio said today that based on trilateral cooperation the Adriatic Sea would be able to develop into the nexus point of logistics and infrastructural connection between Europe and the rest of the world.

Grlić Radman said that the next trilateral meeting, which will be a meeting of the three countries’ prime ministers, will be held in Croatia in June.

Trilateral cooperation was launched last year when Croatia and Italy notified Slovenia they would declare exclusive economic zones in the Adriatic. In line with the 2017 international Slovenia-Croatia border arbitration decision, Slovenia does not have the right to declare such a zone in the Adriatic.

The three countries’ ministers and experts have been discussing the potential for cooperation in protecting the Adriatic Sea since the announcements.

The statement on cooperation in managing the Adriatic Sea, which the three ministers adopted last December but did not sign then, says that as states sharing a sea border, Slovenia, Italy and Croatia share a vision of the Adriatic Sea as a bridge uniting people in the region and providing a source of prosperity for all.

At the meetings, Slovenia has been stressing that the exclusive economic zones must in no way prejudge the rights Slovenia enjoys under international and EU law.