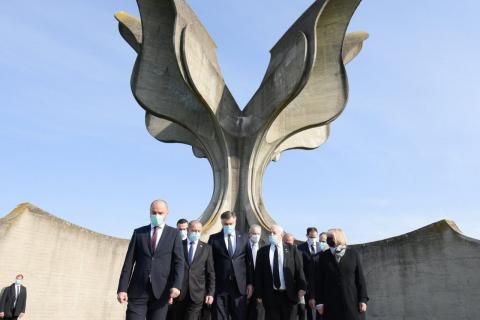 Prime Minister Andrej Plenkovic told the annual commemoration at Jasenovac on Thursday that the Independent State of Croatia, NDH, a fascist puppet state run by the Ustasa movement and supported by Nazi Germany and Fascist Italy, was "one of the most tragic periods in Croatian history".

The commemoration of the victims of Jasenovac, a World War II concentration camp run by the Ustasa, was attended by Croatian officials, representatives of anti-fascist groups and members of the country's Serb, Roma and Jewish communities.

For four years, from 2016 to 2019, representatives of the Jewish and Serbian communities, as well as anti-fascists, boycotted the official commemoration, insisting that the state had not taken real measures to stop or even limit revisionist denials of the Holocaust and genocide during World War II.

Last year however they joined the state leadership at the commemoration because they said they had noticed "some progress".

Due to the coronavirus epidemic, this year's memorial event was modest and divided into several groups that came to the site separately.

After Prime Minister Plenkovic, a wreath was laid by a delegation from the Croatian parliament, and then a delegation led by President Zoran Milanovic, who was accompanied by former presidents Stjepan Mesic and Ivo Josipovic and former prime minister Jadranka Kosor.

President Zoran Milanovic at the commemoration. Photo: Office of the President of the Republic of Croatia/Dario Andrisek.

Earlier on Thursday, the Anti-Fascist League - which includes anti-fascists, human rights NGOs and some...