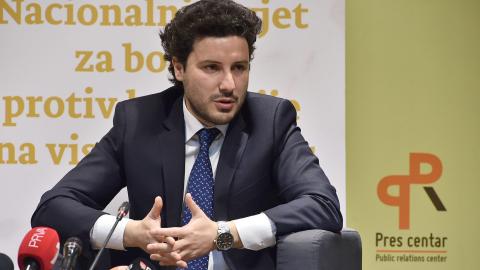 "There is no organised crime without political support and ties within the system. Montenegro will be able to fight organised crime," Abazovic told a press conference.

"Despite the threats, I am still very relaxed. I am ready to pay any price, but we all have to make a commitment," he added.

On Monday, the Montenegrin Interior Ministry warned that Abazovic's safety was at risk after the re-arrest of Slobodan Kascelan, an alleged leader of the Kavac drug gang.

The ministry said that information about the threat was obtained during the investigation of a gang warfare-related murder in the town of Mojkovac on Sunday.

"Police are investigating this, while the ministry has taken additional protection measures for Abazovic," the ministry said in a statement.

"Members of this organised criminal group are part of broader regional structures, with very strong connections at the transnational level, whose key feature is the unscrupulous commission of the most serious crimes," it added.

On April 20, Montenegrin police arrested Kascelan on suspicion of organising a criminal group that has planned and committed several serious crimes.

The same day, Higher Court judge Miroslav Basovic released Kascelan, saying there was not enough evidence for a custody remand.

Five hours later, Kascelan was re-arrested after a State Prosecution Office appeal, while Abazovic accused Basovic of humiliating the police, prosecution and the state of Montenegro.

On Tuesday, the head of the National Council for the Fight against High-Level Corruption, Vanja Calovic Markovic, warned that organised criminal groups are trying to preserve...