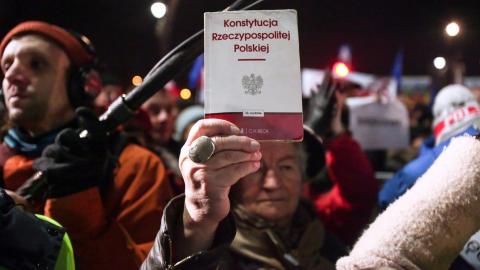 These cases and others where freedom of speech is being challenged by Poland's harsh criminal code sometimes make the international news. But what is less discussed is the alarming bigger picture: how, when it came to power in 2015, Law and Justice (PiS) found a criminal code replete with articles calling for severe sentences - often involving prison terms - for various crimes such as offending religious feelings, insulting state authorities or symbols, and defamation. Now that it partly controls the prosecution and justice system, PiS is leveraging that legislation to intimidate those who stand up to the government.

While in many countries defamation is a civil matter, in Poland it's civil and criminal, with both prosecutors and private individuals able to open criminal defamation cases. Additionally, there's a whole host of insult laws and laws relating to offence to religious feelings contained in the Penal Code of 1997.

"These laws were there from way before PiS came to power, since the 1990s, but many experts and high-ranking people used to say that they are not really used, they're marginal and nothing to worry about," explains Joanna Szymanska, senior...