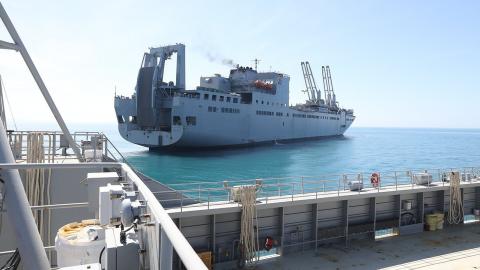 A massive US-led military exercise including 28,000 forces from 26 nations, including the United States, NATO countries and their allies, started this week, and will conduct exercises in more than 30 training areas in 12 countries during April, May and June, including Western Balkan countries.

The annual US-led exercise is designed to build readiness and interoperability between US and NATO and partner militaries.

The Defender Europe 21 drill starts off in the port of Durres in Albania, which joined the alliance in 2009 alongside fellow Adriatic country Croatia.

The exercises will be conducted in various other countries in the Western Balkan region: Bosnia and Herzegovina, Bulgaria, Croatia, North Macedonia, and Romania - and also in other countries further north, such as Germany, Hungary and Estonia.

The exercise starting this week in Durres is billed as a Joint Logistics Over the Shore operation. In the week of May 10, US soldiers will arrive in Tirana, Albania, and in Sarajevo, Bosnia.

The focus will thenshift  to Bulgaria and Croatia, after which the exercises will continue in Germany, the Baltic states and Central Europe.

Last year's exercise was planned to be the largest NATO exercise in Europe in 25 years but it had to be cut back due to the outbreak of the COVID-19 pandemic. US and allied forces managed to conduct some of the planned drills and joint exercises.

This year's exercise will also include COVID restrictions and monitoring but will span the Balkans and the Black Sea region and use key ground and maritime routes that bridge Europe, Asia and Africa.

Equipment and personnel begin flowing this month from the United States to Europe. Next month, units will draw from prepositioned stocks of gear...