Biden pleads for unity, warns of Chinese threat, in speech to Congress 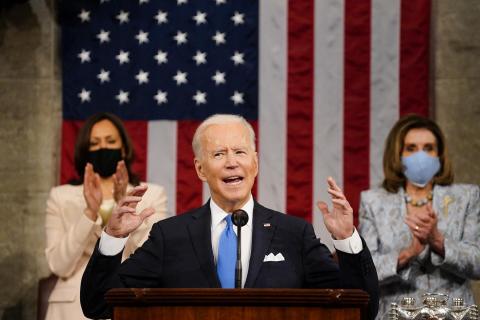 President Joe Biden proposed a sweeping new $1.8 trillion plan in a speech to a joint session of Congress on April 28, pleading with Republican lawmakers to work with him on divisive issues and to meet the stiff competition posed by China.

Pushing a vision of more government investment funded by the wealthy, the Democratic president urged Republicans who have so far resolutely opposed him to help pass a wide array of contentious legislation from taxes to police reform to gun control and immigration.

Republicans largely sat silently during the speech while Democrats applauded as Biden spoke.

Biden, who took office in January, also made an impassioned plea to raise taxes on corporations and rich Americans to help pay for his $1.8 trillion "American Families Plan".

He made his plea in the House of Representatives at an event scaled back this year because of the pandemic, removing his mask to speak to a group of about 200 hundred Democratic and Republican lawmakers, other officials and guests.

Biden is trying to thread the needle between Republicans opposed to more spending and the tax increases needed to pay for it, and liberal Democrats who want him to push for more aggressive plans.

He said he was willing to work with lawmakers on both sides of the aisle to come to an agreement, and he is to meet top Democratic and Republican lawmakers at the White House on May 12 to try to find common ground.

Whether Biden can truly bring Republicans across a deep partisan divide is far from clear, with Congress polarized and Democrats holding only narrow majorities.  ...

The Military Imbalance In The Taiwan Strait (infographic)