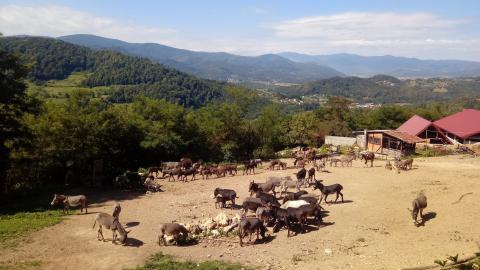 "Through the experience of my daily customers I have noticed that it helps with lung diseases and asthma," he told BIRN. "In situations like this, people are desperate to find a cure, so that's why they buy donkey milk."

"I have had positive numbers during the pandemic," he said.

The same cannot be said of a lot of businesses in Bosnia and Herzegovina, where the Statistics Agency estimates that economic output contracted by 4.5 per cent in 2020, more than the World Bank's 3.6 per cent forecast for the Western Balkans as a whole.

"According to our analysis, the opinion of the profession is that the decline is greater than this stated rate," said macroeconomic analyst Faruk Hadzic.

In a report published on April 1, the World Bank said it expected gross domestic product, GDP, to grow by 2.8 per cent this year, again behind the 4.4 per cent average forecast for the region.

The worst hit sectors were retail, manufacturing, transportation and accommodation, driving up an unemployment rate that was already among the worst in Europe.

In Zenica-Doboj Canton, where Jusupovic's donkey farm is located, industry bodies say the efforts of cash-strapped authorities to soften the economic impact of COVID-19 restrictions have fallen short.

"Since March last year, the Association unfortunately had no interlocutors with whom they could discuss preventing the negative effects of the pandemic on the economy," said Senaida Turkic, board president at the Association of Employers in Zenica, 60 kilometres northwest of the capital, Sarajevo.

"The authorities do not know what they should do, so a lot of wrong solutions have been...