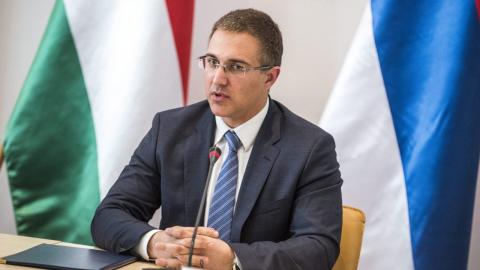 Serbia's Defence Minister, Nebojsa Stefanovic, was questioned on Thursday in the investigation into a former high police official, Goran Papic, who is suspected of returning a seized car to a member of the crime gang of Veljko Belivuk, who was recently arrested .

The Belgrade Higher Prosecution Office confirmed Stefanovic's interrogation took place but did not give out any details.

Papic's lawyer, Branislav Tapuskovic, told the media after the interrogation that Stefanovic said he did not know anything about the return of the car.

"There is documentation about that [return of the vehicle], it is clear as day that the vehicle was confiscated and then returned despite that. Minister Stefanovic does not know anything about it, even though he was the Minister of Police," Tapuskovic said.

"What I can say is that Stefanovic said he did not even know who issued the order to return the vehicle, and that it was not the person I am defending," he added.

It is the first time in 20 years that a Serbian minister was questioned as part of a criminal investigation while still in office.

Papic was deputy chief in the Service for Combating Organised Crime until October 2020.

Stefanovic was Interior Minister from 2014 until October 2020, when a new-old government was formed and the police and defence ministers rotated posts. The current Interior Minister is Aleksandar Vulin, while Stefanovic leads the Ministry of Defence.

Papic was arrested on March 9 of suspicion of influence trading. It is suspicted that in April 2020 he urged the police to return the temporarily seized armoured car to Marko Miljkovic, Belivuk's associate. Papic has been in custody since his arrest.