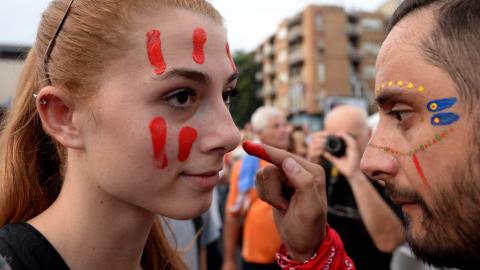 The Washington Agreements, mediated by the former Trump Administration back in September 2020 generated more confusion than resolution, as well as no small amount of bemusement and jokes. More than half a year later, the Agreements seem all but dead in the water, with a new administration in the White House.

Yet for Kosovo at least, there are some lingering consequences. The Washington Agreement pushed it into the Middle East imbroglio that are Arab-Israeli relations. Kosovo's pledge to move its new embassy in Israel to Jerusalem threatens Pristina's relations with much of the Muslim and Arab world. How to extricate from this?

Orthodox believers seen through a window as they show their Easter baskets during an Easter ceremony at St George Church in Istanbul, Turkey, 28 April 2019. Photo: EPA-EFE/SEDAT SUNA

In 1910, Istanbul's 'Rum' or 'Greek' community numbered some 1.8 million, yet the disintegration of the Ottoman Empire, numerous wars and - in particular - tensions between Greece and Turkey have decimated its numbers. Today, the small community numbers some 3,000 people.

Not surprisingly, it has become common place to talk about the disappearance of the Greek/Rum community of Istanbul. In part irritated by such talk about the disappearance of a community that never quite seems to disappear, Nektaria Anastasiadou has written the novel 'A recipe for Daphne' precisely to remind the world that the Greeks/Rum of Istanbul are still alive and kicking. We being an interview with the author of...

Delphi Forum: The pandemic crisis will be a “V crisis”