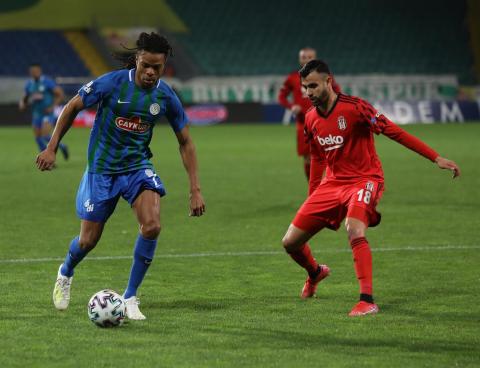 Beşiktaş increased its points advantage to five in the Turkish Süper Lig after mid-week games as it prepares to take on Hatayspor on May 1.

Its closest rival, Fenerbahçe, was held to a goalless draw at Alanyaspor on April 29, a day after the leader won 3-2 at Rizespor, leading to a huge advantage in the title race for Beşiktaş with four games to go.

"We want to claim every possible point until the end of the season," Belözoğlu said after the draw.

"We will keep on fighting for four weeks in the best way possible. I want to say that we continue to keep our faith."

In Rize, Kevin N'Koudou gave the Istanbul team the lead, assisted by Rachid Ghezzal who made his 16th assist in the Süper Lig, more than any other league player.

In the second half, Gökhan Töre doubled his team's lead and Ghezzal sent a stunning long-range strike to make the score 3-0.

A sensational free-kick goal from İsmail Köybaşı and Damjan Dokovic's header helped the home side narrow the deficit with a few minutes remaining in the game, but they were unable to build on the momentum.

Beşiktaş coach Sergen Yalçın said he was delighted with his players' performances and the club was totally focused on the prize.

"As a community, the president, the management, the fans, the players and the technical team are united," he told a post-game press conference.

"On the pitch, everyone will fight to the maximum. Because championships are not won easily. You cannot be a champion without sacrifice, without suffering."

He also criticized his side's next rival and the Turkish Football Federation (TFF) over schedule.

Beşiktaş and Hatayspor will play the only league game on...