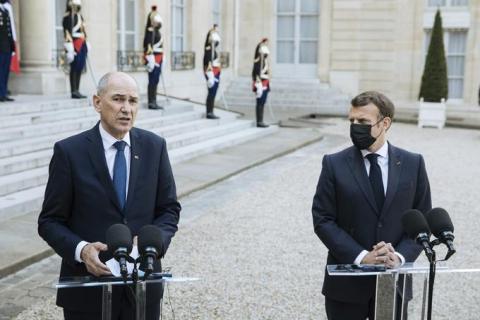 Paris – Prime Minister Janez Janša met French President Emmanuel Macron in Paris on Thursday to discuss the countries’ successive presidencies of the Council of the EU. Macron said before the talks that coordination was needed because of the extraordinary circumstances in which the two countries will hold the presidency.

The French president said before meeting Janša that the Slovenian and French presidencies would be held in exceptional circumstances as Europe is dealing with the coronavirus pandemic and trying to avoid an economic crisis. “That is why we need to be perfectly coordinated,” he said.

According to Macron, Europe must stay united in dealing with the health crisis. Noting that vaccination would enable a careful return to the normal life, he called for more investment in the development and production of vaccines.

The president also expressed hope that the process of adopting national recovery plans and the ratification of the legislation enabling financing would be concluded by summer.

He said he would discuss with Janša the priorities of Slovenia’s EU presidency, bilateral relations and regional issues, especially in the Western Balkans and the EU’s neighbourhood.

Janša said Slovenia and France cooperated in many areas, from economy to culture and sports, sharing the same views on most issues as part of the EU.

He noted that the two countries had signed an agreement on strategic partnership ten years ago.

France is one of the most important economic partners of Slovenia, with trade in goods reaching EUR 3 billion before the pandemic, and trade in services half a billion, Janša said, calling for more French investment in Slovenia.

He said the main priority of Slovenia’s EU presidency would be to boost the EU’s resilience to crises such as pandemics and cyber attacks. He also mentioned speeding up efforts for EU enlargement to the Western Balkans.

Janša stressed there were many obstacles in this respect that needed to be overcome. He pointed to the EU’s commitment made at the summit in Thessaloniki, Greece, in 2003, which guaranteed an EU future to Western Balkan countries when they meet the conditions for membership.

“That is the only prospective positive solution for the region that we see ahead,” Janša was quoted as saying by his office.

Janša’s office said that the prime minister had also expressed condolences to the family of the French police officer Stephanie Monferme, who was killed last week, noting that “we will fight together for zero tolerance to terror”.

The prime minister also invited Macron to Slovenia for the celebration of the country’s 30th independence anniversary.