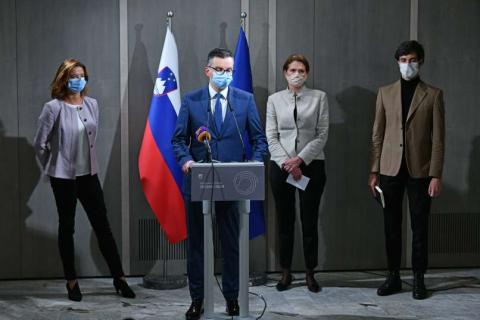 Ljubljana – Several parties welcomed on Thursday the European Commission’s announcement that the state funding of the Slovenian Press Agency (STA) does not constitute state aid because the STA is performing a public service. Most opposition parties said the government had inquired about this to delay the payment. The government has not responded.

The Finance Ministry has not responded to the Commission’s decision announced today, while the Government Communication Office told the STA it had not yet received the decision and could thus not comment.

The head of the opposition SocDems Tanja Fajon said the Commission’s decision was good and quick. She said Executive Vice President of the Commission and European Commissioner for Competition Margrethe Vestager had stressed the importance of the public service.

But the fact remains that the Slovenian government, which put the pressure on the Commission to approve “state aid” in January, will have to provide the money, Fajon said, adding the government was delaying the payment.

The opposition Marjan Šarec List (LMŠ) said that the illegal suspension of funding of the STA was a part of the impeachment against Prime Minister Janez Janša.

“We got empirical evidence today that this is illegal. The European Commission’s decision should help the hesitant MPs when voting on the impeachment at the National Assembly. There are no excuses,” LMŠ head Marjan Šarec wrote on Twitter, welcoming the Commission’s decision.

The LMŠ believes the next steps taken by government representatives and MPs will “clearly show what kind of a country we are living in”.

Alenka Bratušek, the head of the eponymous opposition SAB party, said it was a disgrace for the government that the EU must deal with the STA case.

MEP Irena Joveva (Renew/LMŠ) said the Commission’s decision had been expected but was very important given the media situation in Slovenia.

Joveva said the message from Vice President of the European Commission for Values and Transparency Vera Jourova was very clear. “Let us not forget: this was an unprecedented, cynical manoeuvre of the government to delay the payment of the STA.”

Luka Mesec, the head of the opposition Left, told the STA that by turning to the EU the government had attempted to use the rules on the free market to avoid its responsibilities to the STA.

“The European Commission’s response that starving a national press agency has nothing to do with free market or any other European regulation was expected. On the contrary. This has to do only with the attempted undermining of democracy in the country …” Mesec said.

The government wants to destroy the media landscape and the Commission did not fall for that, he said.

The head of the group of unaffiliated MPs, Janja Sluga, said the Commission had only confirmed what had been clear to everyone – that the Commission does not need to approve the funding of the STA. “Moreover, it pointed out that public funding of press agencies contributes to securing independent news …”

The government’s manoeuvre aimed at delaying the payments by using the Commission has thus failed miserably and exposed the moves of those in power who want to subordinate independent media no matter what the cost, Sluga said.

The coalition New Slovenia (NSi) has not commented yet, but its MEP Ljudmila Novak expressed hope on Twitter that the government would resume the financing of the STA as soon as possible following the Commission’s decision.