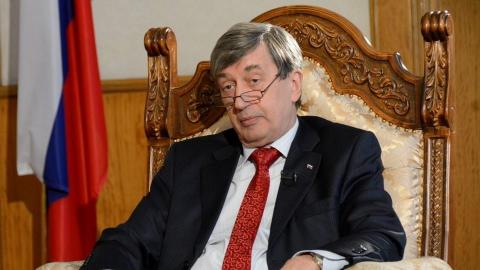 A video was released in Romania on Thursday night showing the former deputy attaché of the Russian embassy, Alexey Grishaev, allegedly meeting Romanian sources in order to obtain classified information.

Romanian authorities earlier on Tuesday expelled Grishaev as a persona non grata, saying his activities had violated the Vienna Convention on Diplomatic Relations. He was accused of spying for the Kremlin's military secret service, GRU.

Romanian authorities say the diplomat tried to recruit government officials to get hold of classified information about Romania's security policies and about NATO.

They said Grishaev wanted to obtain sensitive information from inside the government related to Romania's foreign policy, its energy security, its military sector, and more.

Romanian Foreign Minister Bogdan Aurescu said on April 25 that, as a NATO full member, Romania would not be intimidated after the Russian Ambassador, Valey Kuzmin, said Bucharest should not follow "NATO hotheads in a military endeavour" in the context of Russia's military deployments around Ukraine.

Grishaev's expulsion on April 26 came days after ambassador Kuzmin insisted on April 23 on Facebook that Russian diplomats in Romania were not involved in any illegal activities.

"The Russian embassy limits its political activity in the host country exclusively to the study and analysis of Romania's internal and foreign policy, to inform its government in this regard," Kuzmin said on his Facebook page. "We are obliged to hear about the 'dissatisfaction' of Bucharest periodically," he added, ironically

Grishaev's expulsion comes in a broader context of Russian diplomats being expelled from other parts of Europe due to alleged spying activities, and...