US aid arrives in India as COVID cases explode 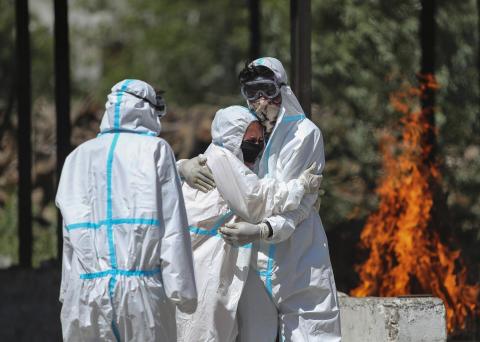 The first U.S. emergency aid to India arrived on April 30 as the country battles a devastating surge in COVID-19 cases which has overwhelmed hospitals and crematoriums.

The supplies arrived as India recorded another 385,000 new cases in the past 24 hours - a new global record - and almost 3,500 deaths, according to official data that many experts suspect falls short of the true toll.

The delivery, which flew in from the Travis military base in California, followed talks this week between U.S. President Joe Biden and India's Prime Minister Narendra Modi.

U.S. officials said other special flights, which will also bring equipment donated by companies and individuals, are set to continue into next week.

Hundreds of thousands of doses of COVID-19 treatment drugs as well as raw materials to produce vaccines and remdesivir, were also being sent, he added.

"It is an unprecedented situation," Shringla said.

Japan is the latest to offer help, announcing Friday it would despatch 300 oxygen concentrators and 300 ventilators to India.

"Japan stands with India, our friend and partner, in her efforts to fight (the) COVID...