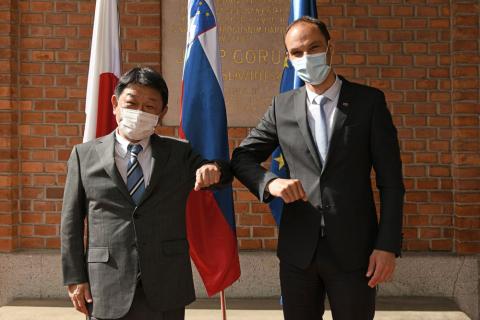 Ljubljana – Foreign Minister Anže Logar received his Japanese counterpart Toshimitsu Motegi on Friday with the pair calling for enhancing cooperation between Slovenia and Japan both in business and politics, as Slovenia sees potential in high-tech. The pair also exchanged views on the Western Balkans and the Indo-Pacific region.

Logar said Japan was one of the most important trade partners and investors in the programme for encouraging investment and internationalisation of the Slovenian economy in the next four years.

The Japanese minister too called for more cooperation in business and other fields, including in cyber security.

Logar pointed out that both countries devoted a lot of attention to cooperation in cyber security, which will also be one of priorities of Slovenia’s presidency to the EU Council in the second half of the year.

The ministers also discussed cooperation as regards to the Western Balkans. In the light of support to EU accession of the Western Balkans, Japan wishes to cooperate with Slovenia, which knows the situation in the region well, Motegi said.

Japan would also like to cooperate with Slovenia as the EU presiding country regarding the Indo-Pacific region, he said. He welcomed the EU’s strategy on cooperation in that region, which was presented earlier this month.

According to Logar, the ministers agreed that Slovenia and Japan shared values regarding cooperation, that they both strive for international order based on law, for tramp trade, open and fair environment, trade and boosting of resilience.

These are the values and principles that are essential for the port of Koper, Logar pointed out.

He also expressed support to Japan organising the Olympic and para-Olympic games, to be hosted by Tokyo this summer. Motegi thanked him for that and asserted that all efforts were being invested in making the events safe.

Janša’s office said the prime minister and the Japanese foreign minister talked about the Covid-19 pandemic, Slovenia’s presidency of the Council of the EU, economic and political cooperation between the countries and security challenges in the Indo-Pacific region.

He will continue his tour of Central European and East European countries in Bosnia-Herzegovina.