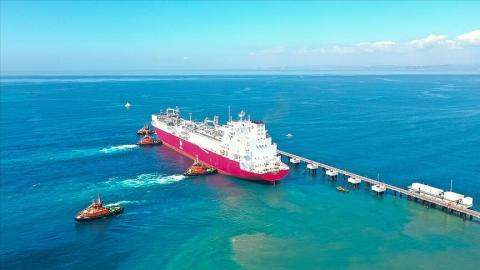 Turkey ranked third in the world after China and India with an annual growth of 1.3 million tonnes in LNG imports in 2020, according to the latest report of the International Group of Liquefied Natural Gas Importers (GIIGNL).

The report also showed that Turkey became the fourth-largest LNG importer in Europe.

Mexico and France were the countries that decreased LNG imports the most.

According to the report, 2020 was a year of two halves for Europe's LNG imports.

"During the first half, the region acted as a market of last resort. During the second half, Europe recorded a decrease in LNG imports compared to the previous year due to a decrease in demand for natural gas because of lockdowns, while storages filled up and US cargoes were canceled," it said.

It was noted that the greatest declines in net LNG imports were seen in France by 16.1% and Belgium by 36.9%.

However, Turkey recorded the highest increase at 14.4% by 1.35 million tonnes, the report showed.

Wishing to diversify its energy resources, Turkey has focused on the use of domestic and renewable resources in recent years. The country, which diversifies...

US, China agree to cooperate on climate crisis