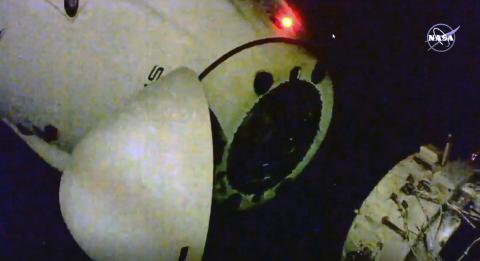 SpaceX returned four astronauts from the International Space Station on May 2, making the first U.S. crew splashdown in darkness since the Apollo 8 moonshot.

The Dragon capsule parachuted into the Gulf of Mexico off the coast of Panama City, Florida, just before 3 a.m., ending the second astronaut flight for Elon Musk's company.

It was an express trip home, lasting just 6 1/2 hours.

The astronauts, three American and one Japanese, flew back in the same capsule, named Resilience, in which they launched from NASA's Kennedy Space Center in November.

Their 167-day mission is the longest for astronauts launching from the U.S. The previous record of 84 days was set by NASA's final Skylab station crew in 1974.

May 1 night's undocking left seven people at the space station, four of whom arrived a week ago via SpaceX.

Glover, along with NASA's Mike Hopkins and Shannon Walker and Japan's Soichi Noguchi, should have returned to Earth last Wednesday, but high offshore winds forced SpaceX to pass up a pair of daytime landing attempts.

Managers switched to a rare splashdown in darkness, to take advantage of calm weather.

SpaceX had practiced for a nighttime return, just in case, and even recovered its most recent station cargo capsule from the Gulf of Mexico in darkness. Infrared cameras tracked the capsule as it re-entered the atmosphere; it resembled a bright star streaking through the night sky.

All four main parachutes could be seen deploying just before splashdown, which was also visible in the infrared.
Apollo 8, NASA's first flight to the moon with astronauts, ended with a predawn...