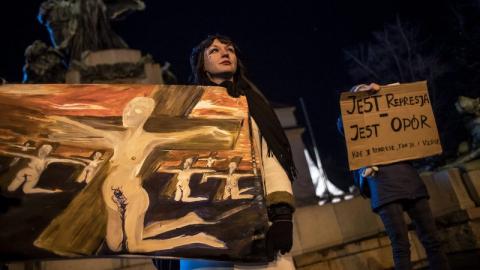 About 60 demonstrators, mostly Poles living in the Czech Republic, joined a protest against an abortion ban law and to support women's rights in Poland, in Prague, Czech Republic, 18 January 2018. EPA-EFE/MARTIN DIVISEK

The intervention by the Polish chargé d'affaires in Prague, described as diplomatically unusual by a Czech deputy minister for legislation, indicates that the right-wing Law and Justice-led (PiS) government is now looking to prevent Polish women from seeking a termination abroad after it engineered a near-total ban on abortion at home. On October 22, the Constitutional Tribunal, which has been illegally stuffed with PiS-friendly judges, ruled that abortions in the case of a malformation of the foetus are unconstitutional.

In the March letter sent to the now former Czech health minister, Jan Blatny, Polish chargé d'affaires Antoni Wrega was quoted by Respekt as writing: "From the point of view of Czech-Polish relations, we perceive it as unfortunate if legislative proposals to legalise commercial abortion tourism are openly justified by the intention to circumvent Polish legislation protecting unborn human life, and if those proposals have the purpose of encouraging Polish citizens to break Polish law."

According to Respekt, in response to Wrega's letter, Blatny replied at the end of March that his ministry did not have the ability to interfere with the law-making processes handled by the parliament and that, in any case, the carrying out of abortions on Polish women on the territory of Czechia was in accordance with both domestic and EU law. The SEN 21 club and Pirates, who presented the amendment to the Czech upper house on the abortion law, envisage no obstacles to it passing.

Asked to comment by BIRN, a spokesperson for the...