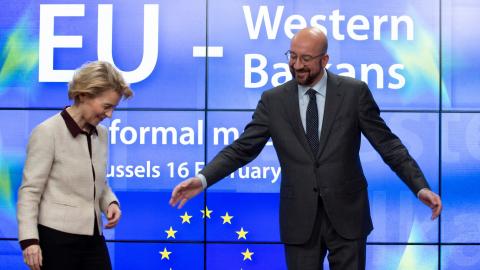 At a panel discussion entitled 'Geopolitical Gambles in the Balkans', Lajcak and Bildt expressed concern about two so-called 'non-papers' - discussion documents - one of which was allegedly circulated by the Slovenian Prime Minister and the other allegedly by France and Germany, although this has been denied.

The first is reported to have suggested that parts of Bosnia and Herzegovina, but possibly also of North Macedonia and Montenegro, would become parts of a 'greater Croatia' and a 'greater Serbia', and that Albania and Kosovo would merge into a 'greater Albania'.

The second reportedly suggested the creation of an autonomous district in Serb-majority northern Kosovo as part of a deal in which Serbia would recognise Kosovo's independence. Both 'non-papers' have sparked widespread controversy, although no one has admitted to being behind them.

"The idea of redrawing borders is not new. It has been here for many years but it was brought to the forefront now. I deeply disagree with these ideas. I consider them extremely dangerous and a war-provoking idea," Lajcak said.

"Unfortunately, the vision of EU membership for the Western Balkans has become more blurred more distant and therefore also less motivated. When we created a void in the region, others are coming with other ideas," he added.

Lajcak argued that implementing the border changes would be "fulfilling the dream of [Slobodan] Milosevic and [Franjo] Tudjman", the 1990s wartime leaders of Serbia and Croatia.

He referred to a joint plan agreed by Tudjman and Milosevic in 1992 for...