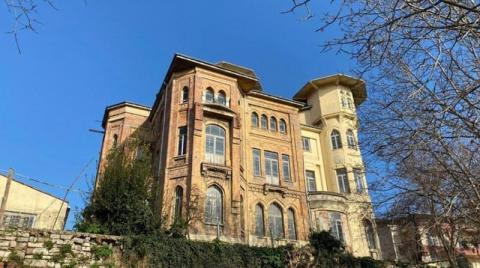 A 113-year-old historic building located on Istanbul's historical peninsula and that stands out with its distinct architectural structure has been bought by the Istanbul Metropolitan Municipality.

"Now, we will transform this historical building into a cultural space that will be used by all Istanbul residents. Congratulations to our city," İmamoğlu added.

The price requested for the historical building, which was put up for sale in the past months, was announced as 30 million Turkish Liras ($3.6 million).

Bulgur Palais was built by Mehmet Habib Bey, who was elected as a deputy from the northwestern province of Bolu in 1908 as a candidate of the Committee of Union and Progress (İttihat ve Terraki Fırkası) after the proclamation of the Second Constitutional Monarchy in the last years of the Ottoman Empire.

The Bulgur Palais, a large mansion and garden designed by the Italian Levantine architect Giulio Mongeri dating back to 1912, was one of the first residential building to be realized with a detailed decorative scheme and larger scale associated with public buildings of Istanbul at the time.

Mongeri worked on this splendid brick palace for Mehmet Habib Bey who made a fortune selling bulgur (cracked wheat), hence the name. The building, which is a fantastic example of the First National Architecture Movement, stands out with its imposing huge tower.

After the proclamation of the Republic of Turkey, the ownership of the building passed to the Ottoman...