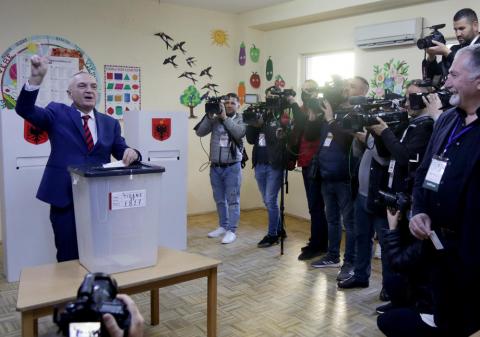 Albania's parliament on Friday voted to set up a commission to examine the possible ousting of the country's President, Ilir Meta.

It came after a.group of ruling Socialist deputies requested his dismissal, accusing him of interfering in the April 25 legislative elections in violation of the constitution.

The request was reviewed by parliament's Law Commission on May 5 and 6 May and the President was called to a hearing on May 6, which he did not attend.

The request to form a special commission was finally accepted on Friday in a vote in parliament. It was backed by 97 deputies in parliament. There were six votes against and one abstention. Most opposition deputies in the 140-seat chamber are boycotting its work.

The President condemned the vote through his media adviser and spokesperson Tedi Blush, who said he would not recognise any unconstitutional acts by the country's "one-party" parliament.

"The Institution of the President of the Republic will not recognise any unconstitutional and illegal decision or activity of the one-party Assembly in office, or the decisions of any other puppet institution of this kleptocratic regime," he said.

The ruling Socialists, who won the April 25 elections, have accused Meta of openly favouring opposition parties and denigrating their own party, "violating the equality of political competition and violating the impartiality that the constitution has given to the President of the Republic". They claim that Meta has damaged the image of the presidency.

Meta also accused the Law Commission of rushing the process to oust him in order to distract the public from the "post-election situation" and from "solving election crimes".

As leader of the Socialist Movement for Integration...