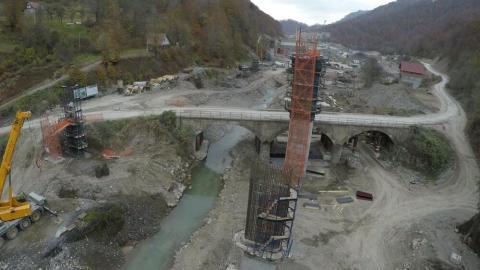 The UNESCO protected Tara river has been damaged during construction of Bar-Boljare highway. Photo: MANS

The main constructor of the first phase of the highway sought permission from the country's Agency for Nature and Environmental Protection to repair the damage done to 500 meters of riverbank near the town of Kolasin.

"Remedial work is necessary after damage that occurred during the execution of works on the Matesevo ​​loop. The stabilization of the left bank of the Tara, under the old Matesevo ​​bridge, to a length of 500 meters, should be completed by October," the request said.

On August 31 last year, the Agency rejected an earlier Chinese request to repair damage done to the Tara riverbank because CRBC did not follow its suggestions.

It called on the CRBC to propose a new plan, stressing that the riverbank near Matesevo had been badly hit by the building work.

"Construction activities led to the turbidity of a river of national importance while the deepening of the 500-metre-long riverbed affected Tara's biodiversity," the Agency said.

On March 3, the Prosecution in Montenegro launched the first state investigation into environmental damage done to the UNESCO-protected river, claiming the company started construction of a facility without getting environmental permits.

Prosecutors in Kolasin said it had damaged the local environment to a great extent and over a wide area.

CRBC is building the Montenegrin leg and 85 per cent of the first section is being covered by a $944 million loan from China's Exim Bank. The first annual repayment of $67.5 million is due...