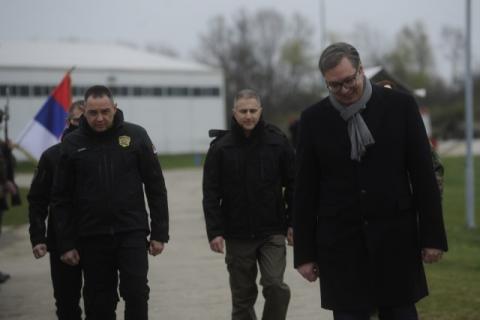 In the course of presenting reports to the Parliamentary Committee on Defense and Internal Affairs on the work of internal control, the work of the Ministry of the Interior in the period from October to December 2020, as well as the security situation from July to December 2020, Minister of Interior said that political stability is a precondition for any other stability.
Vulin praised the cooperation with the Security Information Agency and pointed out that the Ministry of the Interior and the BIA work as one service and that their successes are joint accomplishments.
He thanked the public prosecutor Zagorka Dolovac and the prosecutor for organized crime Mladen Nenadic, without whose, as Vulin said, "personal courage" it would not have been possible to break the clan of Veljko Belivuk.
"In the period from October to December 2020, the total crime rate dropped by 10.5 percent," said Vulin, adding that "statistics are statistics", but that the most important thing is whether citizens feel safe. He said that 75 percent of aggravated murders, 66.7 percent of murders and even 90 percent of inflictions of grievous bodily harm were solved, and that it is important that criminals know that someone will deal with them.
"During this period, we had two mafia murders that were solved in record time," the minister said, adding that the killer from Belgrade's TC Usce was in Montenegro, and that the murder in Belleville was solved in seven days and that it was appalling for him that "a 21-year-old boy committed such a murder."
"In the period from October to December 2020, domestic violence was reduced by 10.5 percent, 1.220 cases were reported, but as he said, marital violence is most often reported, and much less violence of children against...