Letter written to quake-victim mother decade ago found in debris 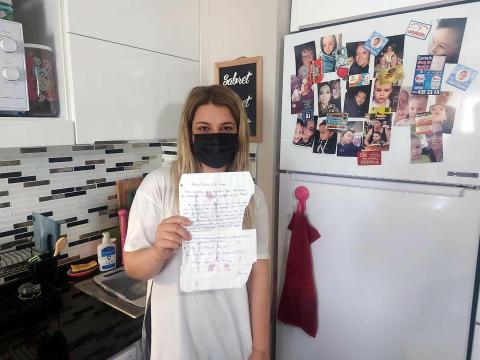 A woman who lost her son and mother in a 6.6-magnitude earthquake that rattled İzmir on Oct. 30, 2020, sobbed with sorrow on Mother's Day as police found a letter she wrote to her mother a decade ago.

"I feel empty. I lost my mother and a child when I was getting used to being a mother," Yağmur Gürman told Demirören News Agency on May 9.

Some 116 people lost their lives in the 16-second earthquake in the western province of İzmir, including Gürman's 2.5-year-old son, Barlas, and her mother, Fatma Ateş.

Officials have been searching the wreck of the apartments that crashed down in the quake, and recently police called Gürman to deliver some of her belongings found under the debris.

"There were mostly bills in the bag police gave me. I was getting furious as I had nothing useful, then, I saw the letter I wrote to my mother 10 years ago," said Gürman, adding that her mother used to keep all the letters she wrote to her.

Gürman stated that she could not stop herself from crying on seeing the letter, adding, "Mother's Day meant a lot to me. I used to write letters to her and give her flowers. Now I feel alone."

Gürman was at her workplace at the time of the earthquake, blaming herself a little for leaving her son and mother alone at home.

"I could have protected them," Gürman said in regret.

Officials searching the wreck of the apartment found the body of Gürman's mother hugging her grandson while trying to protect him.

"She lost her life while trying to save my son. I still live that moment," she said.