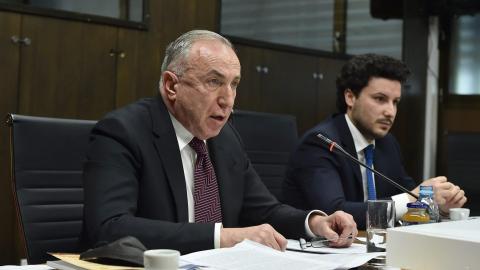 The changes being proposed would see Prosecutorial Council members being elected by the votes of 41 out of a total of MPs in parliament, while any reputable lawyer can be elected as Supreme State Prosecutor.

The existing law says that Prosecutorial Council members need the votes of a two-thirds majority, or 54 MPs, with the bar falling to 48 MPs in a second-round vote, and that only a prosecutor can be elected as Supreme State Prosecutor.

Abazovic argued that the prosecution needs the changes, which should be put to a vote in the legislature May, in order to better uphold the rule of law.

"We will ensure the depoliticisation of the Prosecutorial Council, as a simple majority can be accepted as a transitional solution. In my consultations with the parliamentary majority, that is acceptable. We had to finally finish the prosecution saga," Abazovic told a press conference.

On February 3, the ruling majority proposed legal amendments that would have opened the way to the dismissal of the Supreme State Prosecutor and Special State Prosecutor, Ivica Stankovic and Milivoje Katnic, who are contentious figures because of their links to the former government led by the Democratic Party of Socialists, DPS, and Katnic's key role in the trial of a group of people accused of plotting a coup in 2016.

But on February 16, Prime Minister Zdravko Krivokapic said the proposals needed to be withdrawn and European Union experts consulted first.

His request came after the EU ambassador to Podgorica, Oriana Christina Popa, warned that the proposals could endanger judicial reforms. On April 20, the government made amendments to the proposed law...