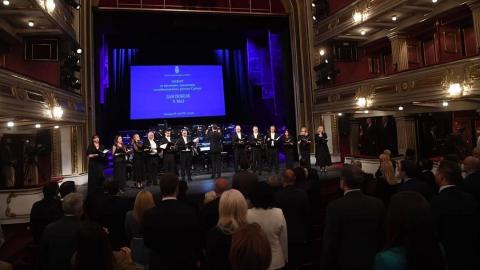 Several historians have criticised the Serbian authorities after Chetnik movement leader Dragoslav 'Draza' Mihailovic's picture was displayed alongside that of Partisan leader Josip Broz Tito at a state-sponsored event at the National Theatre in Belgrade on Sunday to commemorate Victory Day in World War II.

During a musical section of the event, documentary photos and videos from the WWII were shown on a screen behind the singer and the orchestra, and at one point, photographs of Mihailovic and Tito appeared next to each other.

Milovan Pisarri, a historian from the Belgrade-based Centre for Public History, said that "unfortunately, this is not strange" because the Serbian authorities have sought to repaint the nationalist Chetniks as anti-fascists, despite the fact that they collaborated with Axis occupation forces.

At the Victory Day event, pages from a newspaper showing that the German authorities were offering a reward for the capture of Mihailovic and Tito "alive or dead" were also displayed.

Pisarri argued that the call for the detention of Mihailovic was taken out of context, saying that the German occupying authorities "viewed the Chetniks as unreliable collaborators, so in certain situations they used the Chetniks, and in others, for example when they feared an Allied invasion of the Balkans, some groups of Chetniks were arrested".

Three marches that are strongly identified with Dimitrije Ljotic, a political leader who collaborated with Nazi Germany, were also played during...