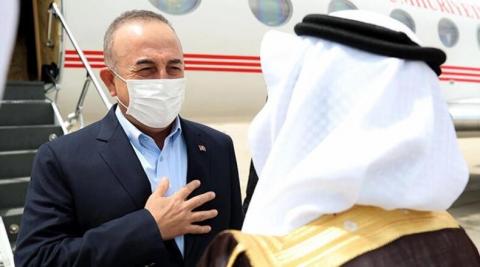 Turkish Foreign Minister Mevlüt Çavuşoğlu has started his two-day official visit to Saudi Arabia after years of strained relations with the Gulf country since the killing of Saudi journalist Jamal Khashoggi in Istanbul.

The visit comes as Turkey and Saudi Arabia have stepped up to restore ties and amid the ongoing tensions in Jerusalem after Israeli aggression at the Al-Aqsa Mosque.

"[I am] in Saudi Arabia to discuss bilateral relations and important regional issues, especially the attacks at the Al-Aqsa Mosque and the oppression against the Palestinian people," Çavuşoğlu wrote on Twitter upon his arrival in Saudi Arabia.

The relations between Ankara and Riyadh hit an all-time low after the 2018 killing of Saudi journalist Jamal Khashoggi in Istanbul. The visit comes as Turkey stepped up to restore ties with Arab nations, including the Gulf country.

Khashoggi was killed on Oct. 2, 2018, after he entered the consulate to get documents that would allow him to marry his Turkish fiancee, who was waiting outside.