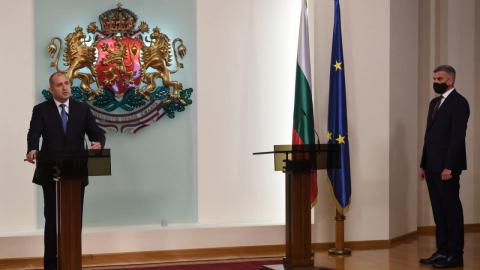 Bulgaria's caretaker government led by Stefan Janev will not change Sofia's stance on blocking the start of EU negotiation for North Macedonia in a dispute over history, language and identity.

The news further diminishes the chances of a speedy breakthrough in bilateral talks before June, when the EU has pencilled in the official start of talks.

The new caretaker Foreign Minister, Svetlan Stoev, said on Wednesday that the new government lacked the authority to change the country's position on this issue, since Bulgaria's framework position on North Macedonia was adopted with a consensus by all political forces in parliament.

He was referring to the Bulgarian parliament's declaration of October 2019 in which most legislators conditioned support for the start of North Macedonia's long-awaited EU accession talks on a slew of identity-related and historical issues.

"From now on, everything is in the hands of North Macedonia's officials. They know what the Bulgarian position is and should not speculate that there will be any change in the next two or three months, as long as this caretaker government lasts," Stoev said in the Foreign Ministry, at a ceremony marking the start of his term in office.

Bulgaria imposed a blockade on North Macedonia's EU accession talks last November, citing objections on the Macedonian language, national identity and some historical figures that both countries claim as their own.

The EU Council of Ministers then refused to adopt a negotiating framework for North Macedonia which would allow the start of accession talks.

Although many observers doubted that there was enough time until June to reach a breakthrough, the latest words from Sofia seem to cement the stalemate even further.