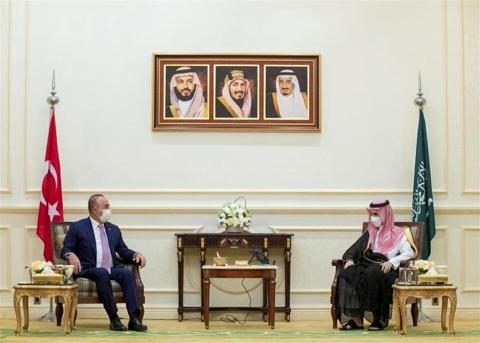 Turkey and Saudi Arabia will maintain dialogue to address their disagreements, Turkish Foreign Minister Mevlüt Çavuşoğlu said on May 11, after discussing bilateral ties and Israeli attacks in Jerusalem and Gaza with his Saudi counterpart in Mecca.

"We had a very open and sincere meeting. We decided to continue our dialogue," Minister Mevlüt Çavuşoğlu told reporters after meeting with his Saudi counterpart in Riyadh, Saudi Arabia.

Çavuşoğlu said he had invited his Saudi counterpart to visit Turkey to continue talks, adding that the necessary work would be done to forge stronger bilateral ties.

On continuing Israeli attacks on Al-Aqsa Mosque and Gaza, Çavuşoğlu said, "We always condemn [attacks] like this, but the ummah is expecting us to take a step," referring to the international Muslim community.

"Such attacks have to stop now. Of course, we need to protect the rights of Palestinians within the framework of international law. We should never veer from the two-state vision."

Stating that steps to be taken for Palestinians in the face of Israeli attacks would be discussed in detail at an Organization of Islamic Cooperation (OIC) foreign ministers meeting next week, he also voiced hope for a decision on the Israeli attacks in an extraordinary meeting of the U.N. General Assembly.

Turkey will continue its efforts to protect the rights of Palestinians and other oppressed people, he added.

Later, on Twitter, Çavuşoğlu said that Turkey and Saudi Arabia...