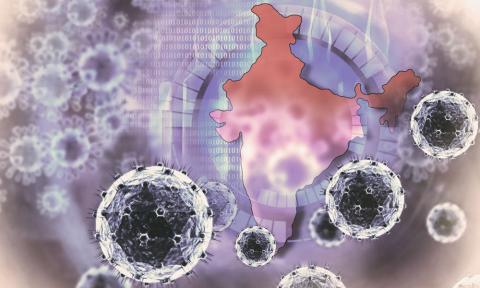 Ljubljana – Slovenia has confirmed a case of the coronavirus first detected in India, follows from the GISAID portal, which provides open-access to genomic data of influenza viruses and the novel coronavirus.

According to the portal, the Indian variant was confirmed by the Institute of Microbiology and Immunology (IMI) at the Ljubljana Faculty of Medicine in a sample taken on 20 April.

IMI head Miroslav Petrovec told the STA the Indian variant had been confirmed in one of the sequences deposited with the institute. The sample belonged to a person who tested positive on 20 April having returned from India.

The institute confirmed the Indian variant after back analysing all Slovenian samples again after updating on 11 May the algorithm to sequence the variants according to official Pango lineages as the B.1.617.2 variant was declared a new worrying genetic mutation.

In the latest screening of 576 samples taken between 26 April and 2 May the Indian variant was not confirmed, while the UK variant was confirmed in 90% of the samples.

Meanwhile, no new cases of the variants first detected in Brazil, South Africa or Nigeria were confirmed, nor the variant spread most widely in the French overseas department of Mayotte.

Nor have the California or New York variants been confirmed in Slovenia so far.

Between 24 February and 4 May the IMI, in cooperation with the National Institute of Public Health, sequenced 147 genomes of coronavirus from samples taken from vaccinated persons.

The genetic variants with the vaccinated persons were those that are frequent in Slovenia and in about same proportions as they appear generally in the population.

Maja Rupnik of the National Laboratory of Health, Environment, and Food said that given data from the UK, the Indian variant is similarly virulent as the UK variant and did not cause any worse symptoms.

She said he data available so far indicated the Indian variant was not as changed that the antibodies developed after catching Covid-19 or getting vaccinated would not work against the variant.

The labs sequencing genomes of the novel coronavirus enter their data into the GISAID database, a global scientific initiative that promotes rapid sharing of data from all influenza viruses and the coronavirus causing Covid-19.

The latest situation on coronavirus variants in Slovenia is to be presented at Thursday’s Covid-19 press briefing.

The World Health Organisation has said that the Indian variant B.1.617 is more transmissible and thus cause for concern.

Latest on the coronavirus: Deaths pass 6,500 worldwide
Romania to cap prices of calls to EEA countries as from May 15