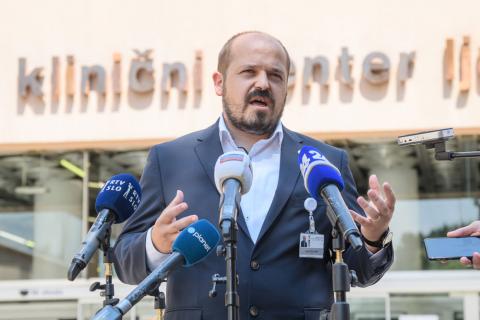 Brussels – The health minister expects that the EU will have enough Covid-19 vaccine in the coming months to fight off the pandemic, and that a digital green certificate will also play an important role. Its first version could be available in Slovenia in June, allowing residents to travel abroad over the summer, he said on Wednesday.

Speaking to Slovenian reporters in Brussels, Janez Poklukar said that the supplies of the vaccine in the EU were getting more stable by the week and that their quantities were much larger than in recent months.

The trend is expected to continue as there is an increasing number of producers that can cover the needs at the EU level and broader.

The minister noted that Slovenia, which is to assume the six-month presidency of the EU Council on 1 July, advocated a joint approach by the EU, and this was one of the topics discussed with European Commissioner for Health and Food Safety Stella Kyriakides.

Another major topic when it comes to fighting the pandemic is the introduction of a digital green certificate, which is expected to make it easier to citizens to travel within the EU and use services, Poklukar said.

According to him, efforts are being made by Slovenia to a test version of the certificate to be introduced as soon as possible. It is expected to be available before the end of May, and a full version at the beginning of June.

One of the key challenges will be different perceptions of the efficacy of vaccination in individual member states, which is the question the minister raised as he met Kyriakides, proposing a broad debate about this at the EU level.

As this is to be discussed next week at an informal meeting of the EU health ministers, Poklukar would like to see as broader consensus as possible reached with the objective of ensuring EU citizens to travel freely around the bloc.

Slovenia is in talks about this with the neighbouring countries, in particular with Croatia, where the most Slovenian citizens travel in the summer.

Poklukar is in Brussels as part of presentations of Slovenia’s priorities in health for the EU presidency, which include the strengthening of the health resilience and responsiveness of the EU, as laws for a stronger health union are being drafted.

The minister said that laws related to the European Medicines Agency (EMA), European Centre for Disease Prevention and Control (ECDC) and resilience systems would require the greatest effort.

Also a great challenge is the Health Emergency Preparedness and Response Authority (HERA), which is expected to be established by the end of the year, he added.

In addition to Kyriakides, Poklukar also met Commissioner for Crisis Management Janez Lenarčič Commissioner for Cohesion and Reforms Elisa Ferreira, and held virtual talks with Slovenian MEPs as he wrapped up a two-day visit to Brussels.