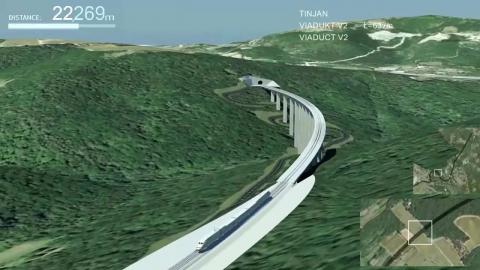 Ljubljana – The National Assembly has narrowly rejected opposition-sponsored changes to the act on the construction of a new railway line between the port of Koper and Divača seeking to strike out the option that allows foreign capital to be invested in the project. Coalition MPs pointed to the role of foreign countries in the port’s development.

On the first reading on Wednesday, the changes saw 43 deputies voting in favour and 44 against, so the proposal is ending its path in parliament.

The debate saw deputies express different views on the possibility of the project being financed by foreign countries, for instance the landlocked countries to the north of Slovenia.

Hungary was being mentioned the most, as the government last November filed to parliament an initiative for a relevant agreement to be signed with the neighbouring country.

Just today, as he visited Brussels, Infrastructure Minister Jernej Vrtovec pointed to the importance of the project for the port of Koper, which is not only of strategic importance for Slovenia, but also for the nearby landlocked countries.

“In this respect the landlocked countries must be our partners,” he said, adding that he had already “visited Hungary and Slovakia, and next week this topic will also be broached in Prague.”

At the parliament session, the idea was defended by State Secretary Aleš Mihelič, who said that “we are talking about a law that only allows all interested countries to participate in the project if a joint strategic interest is established.”

Matej T. Vatovec of the Left said on behalf of the initiators that the government was pretending ignorance in maintaining that it was not a law tailored for Hungary’s investment.

“One month after this government was sworn in, Hungarian Foreign Minister Peter Szijjarto again appeared in Ljubljana and started talks about this,” he noted.

Vatovec labelled the initiative for the neighbouring country to join the project as “utter madness and nonsense”, as the planned EUR 200 million investment by a foreign partner would have to be repaid regardless of the project’s profitability.

Bojana Muršič of the Social Democrats (SD) said that it was logistic companies, and not the state, who looked for the most favourable routes. “All countries should be given the opportunity to access Luka Koper under equal conditions.”

Alenka Bratušek, the infrastructure minister in the previous government and current MP and president of the opposition SAB party, wondered why Hungarians should be allowed to enter ownership of infrastructure in Slovenia.

“Let me tell you once again that [Hungarian Prime Minister Viktor] Orban, your friend, would never do something like this, he would never let Slovenians into any infrastructural project,” she added.

Boris Doblekar of the ruling Democrats (SDS) said that the “whining” by the former prime minister and infrastructure minister was “really childish” and added that the government of Marjan Šarec had given up and let the new government do the job.

His party colleague Bojan Podkrajšek said that the “strict conditions prevent majority ownership by a foreign partner, and in any case Slovenia remains the majority owner.”

Aleksander Reberšek of the coalition (NSi) wondered what Bratušek had been doing regarding the project when she headed the Infrastructure Ministry. “Oh, exactly, you were signing annexes,” he said.

Mojca Žnidarič of the coalition Modern Centre Party (SMC) noted that the changes would have stripped Slovenia of the chance of a long-term strategic cooperation and prevented a more favourable distribution of financial risks.

Dušan Šiško of the opposition National Party (SNS) said that Slovenia should set clear conditions for cooperation with other countries. “Due to the geo-strategic position and logistics connections, Hungarians are certainly a good partner.”

“It is not wise to close the door to our neighbours, also regarding the potential financial participation in the project, but of course under the rules of the game that are known in advance,” said Ivan Hršak of the Pensioners’ Party (DeSUS).

Independent MP Branislav Rajić said that “we don’t need friends from abroad, if they for instance force their type of dictatorship on us, and if we accept paying heavily for this then we perhaps really deserve a dictatorship.”

The latter said that the changes would prevent “unnecessary, detrimental and more expensive” entry of foreigners in the project that could affect in the long run the national railway operator, the sole maritime port and Slovenia in general.

Szijártó: "It's a shame for Brussels"

Goran Dragić to transfer to Chicago

SD decides to run with own presidential candidate

Govt urged to meet over wheat purchase as harvesting is ending

Covid cases up by 40% at the weekend week-on-week