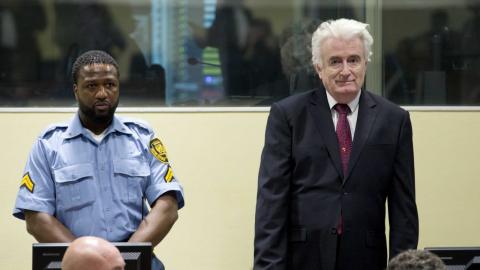 The British Foreign Office said on Wednesday that it has agreed to allow wartime Bosnian Serb president Radovan Karadzic, who was jailed for life by the UN court in The Hague, to be transferred to a prison in the UK.

"Radovan Karadzic is one of the few people to have been found guilty of genocide. He was responsible for the massacre of men, women and children at the Srebrenica genocide and helped prosecute the siege of Sarajevo with its remorseless attacks on civilians," British Foreign Secretary Dominic Raab said in a statement.

"We should take pride in the fact that, from UK support to secure his arrest, to the prison cell he now faces, Britain has supported the 30 year pursuit of justice for these heinous crimes," Raab added.

Karadzic, who is now 75, was sentenced to life in prison in March 2019 for the genocide of Bosniaks from Srebrenica, the persecution of Bosniaks and Croats across the country during wartime, terrorising the population of Sarajevo during the siege of the city, and taking UN peacekeepers hostage.