Sinovac provides license to Turkey to produce its vaccines 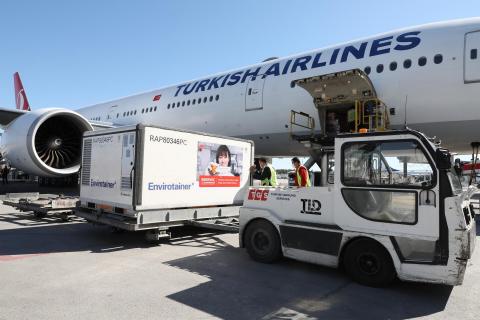 Sinovac, the Chinese producer of a COVID-19 vaccine, has provided a license to Turkey to manufacturing the jabs.

The company's CEO Yin Weidong said Turkey was among five countries given a production license for the vaccine, along with Indonesia, Brazil, Malaysia, and Egypt, according to Bloomberg.

Yin stated that they supplied vaccines sufficient to vaccinate 20 percent of the population in Turkey, Brazil, and Indonesia, but that would not be enough, and consequently, they started the licensing process for the production of the jabs in those countries.

"As the virus continues to spread, we need to expand our offering [vaccine], which is indeed a huge challenge," Yin noted.

The country has ordered 100 million doses of vaccines from Sinovac, though authorities have acknowledged that the shipment has hit snags as countries scramble for access to large amounts of jabs amid the mounting pandemic.

Meanwhile, a plane carrying another batch of CoronaVac landed early on May 12 in the Turkish capital Ankara, according to the Health Ministry.

The vaccines will be distributed to hospitals and health centers across Turkey after necessary tests are conducted, the ministry said in a statement.

Turkey has administered nearly 25.4 million coronavirus jabs since launching a mass vaccination campaign on Jan. 14, according to official figures.

To date, Turkey has been giving the Sinovac and BioNTech jabs, with the first shipments of the Sputnik V vaccine expected to reach the country this month.