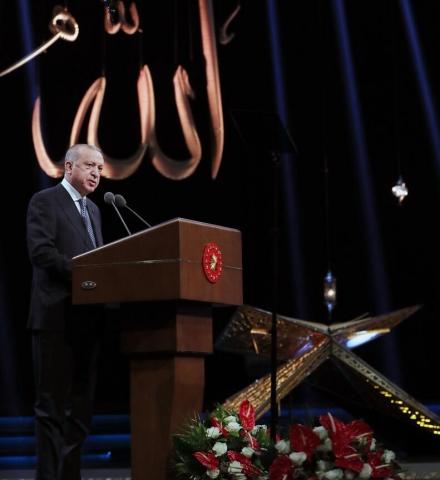 President Recep Tayyip Erdoğan has complained that Europe is becoming an open prison for 35 million Muslims due to the spread of Islamophobia and discriminative laws passed by some prominent countries, including France.

"Racism, discrimination, animosity and intolerance towards immigrants are just a few of these maladies. Without a doubt, Islamophobia among them is just as dangerous as the coronavirus. This virus has rapidly been spreading, particularly in European countries," Erdoğan said while addressing the final of the Holy Quran Recitation Contest broadcast by national broadcaster TRT late May 12.

"Europe, which is home to 35 million Muslims, including 6 million Turks, is now increasingly turning into an open-air prison for our brothers and sisters," Erdoğan warned.

"I am putting it openly that there is no difference between the climate of hatred created against Jews before World War II and the atmosphere that is being instigated against Muslims today. To be a Muslim, to live like a Muslim in many Western countries, especially in France, is now enough to be labeled as the 'other.' Particularly women wearing the headscarf are the primary victims of this wave of hatred that is on the rise in Europe," he suggested.

Underlining that European politicians, unfortunately, seek to exploit the virus of Islamophobia plaguing the society instead of fighting it, Erdoğan stated that the situation has now reached an alarming level, with Muslims who live in Europe facing grave threats against their security.

Turkey ready to work with France

The French government's insistence on passing the law to combat extremism despite the Muslim community's reaction has further raised concerns, Erdoğan pointed out. Underlining...