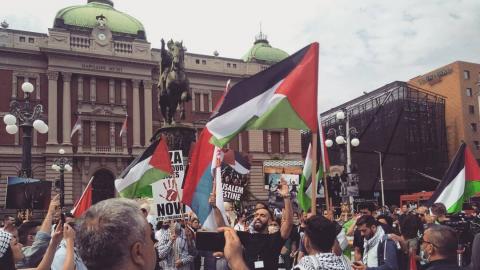 With Israel now also threatening an all-out invasion of Gaza, Palestinian citizens living in the Balkans and some local Muslims have taken to the streets to accuse Israel of aggression.

On Wednesday, around a hundred Palestinians demonstrated in Belgrade's Republic Square displaying or shouting slogans such as, "Liberate Palestine", "Freedom to Jerusalem" and "Stop killing children".

A representative of the Palestinian diaspora in Serbia, Sami Hijo, called on Serbian people to join in denouncing "the suffering" of the Palestinian people who, he said, were being subjected to "the brutal aggression of the Israeli army" for "defending their homeland".

Dozens of Palestinian residents and other Muslim citizens of Montenegro's capital, Podgorica, also staged a demonstration of support for Palestinians in Gaza on Wednesday.

In Bucharest, Romania, the Coalition for Solidarity Romania-Palestine called for a demonstration to condemn Israel's actions on 15 May.

However, in the other corner, the leader of Romania's Jewish community and representative of the Jewish minority in parliament, condemned "the Hamas terrorist organisation" for allegedly targeting Israel's "civilian population", adding that Israel has a right to defend itself.

Following weeks of clashes between Palestinian youths and Israeli police around a mosque in East Jerusaalem, Palestinian militants in Gaza on Monday started firing hundreds of rockets at Israel. The Israeli military responded with airstrikes that killed top Hamas commanders and toppled a tower block and other buildings said to host intelligence and...