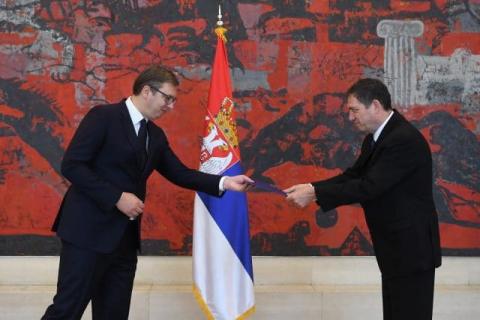 Israel's ambassador in Belgrade, Yahel Vilan, has drawn strong criticism in Serbia over an interview on Wednesday on TV Prva, when he addressed the hot topic of his country's recognition of Kosovo.

Vilan insisted Israel had only recognised Serbia's former province under US pressure, adding that it all came about as a result of the US-brokered Washington agreement, signed in September 2020 by Serbia and Kosovo.

"Israel's decision to recognise Kosovo was made under American pressure. [But] By the way, let's not forget that this was done within the framework of the [Wshington] agreement between Serbia and Kosovo, especially with America, and not with us, with Israel," he said.

Serbia's Foreign Minister Nikola Selakovic dismissed the suggestion that Serbia had, in effect, brought this about by signing the Washington deal and so implicitly recognising Kosovo itself.

"What the Israeli ambassador in Belgrade said is not true, and it is a kind of rudeness," Selakovic told TV Prva the same day.

Holding the Washington deal documents in front of the TV camera, the minister stressed that the leaders from Belgrade and Pristina signed different documents, emphasising that only the document signed by Kosovo states: "Pristina and Israel agree to recognise each other."

"Israel succumbed to [US] pressures that our [Serbian] President did not," the minister added.

Selakovic also warned that the relocation of the Serbian embassy from Tel Aviv to Jerusalem, which formed part of the Washington deal, was now unlikely to happen, "after the Israeli recognition of Kosovo".

Yilan later reacted to Selakovic's criticism, claiming he never suggested in his interview that Serbia had somehow recognised Kosovo via the Washington deal.