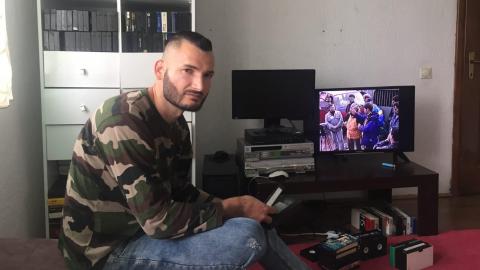 "Not only the new materials I find, but I cannot resist watching those I found earlier too. Then I cannot stay calm," he explained.

The videos include amateur footage shot by civilian eyewitnesses or Kosovo Liberation Army, KLA fighters, and images recorded by television crews. The tapes were made during or immediately after the crimes. Shala also has some audio recordings of massacres on his shelves.

In some cases, those who made the recordings that he has collected are known to him, but often they are not.

"In most of the cases, they were recorded by civilians and media, but there are some which are difficult to figure out who recorded them," he said.

Shala explained that he often needs to negotiate with people for weeks or even months to get them to give him their videos.

"It is very difficult to collect such materials as a private person. People hesitate to hand them over, they often do not trust the aims for which they will be used," he said.

The mostly soundless, unedited recordings have mostly never been seen by the public.

In one video, there is footage of a massacre committed by Serbian forces in the southern Kosovo village of Rogove e Hasit where 21 ethnic Albanians were killed in January 1999. Half of the victims were in a red van, while the others were shot in their houses.

The video images show Serb policemen collecting the civilians' corpses and putting them outside the houses. The footage clearly shows that one person is still alive in the midst of the dead bodies because their breath can be seen in the cold air.

Members of the OSCE Kosovo Verification Mission, which operated during the war, can also be seen at the scene. In the end, the policemen place machine guns next to the civilian...