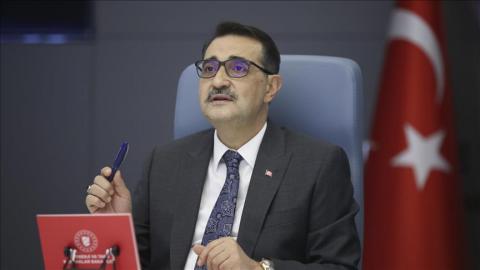 Minister Dönmez spoke during the Association for Renewable Energy Research's online conference and said that Turkey's electricity production from renewable energy has been above the 40% band for the last 3 years.

He said that renewable energy is the only resource, shares of which continue to increase in energy mix even during the coronavirus pandemic.

The minister said that more than $ 2 trillion has been invested in renewable energy in the global markets in the last 10 years and this figure is expected to reach 1.3 trillion dollars in the next 5 years.

The appeal of renewable energy will only increase with factors such as decreasing costs, incentives, and combating climate change, he said.

"Renewable energy investments did not slow down even during the epidemic. We have also witnessed that the renewable energy sector is more resistant to the destructive effects of the epidemic and it succeeded better than the others in these trying times. This proves us that the green energy transformation will continue exponentially. Renewable energy resources will continue to be at a different point in terms of both their contribution to energy independence and global responsibilities," the energy minister said.

Renewable energy will both stimulate economic mobility and continue to be one of the most important factors in reducing carbon emissions, with resource investments, infrastructure and technology investments, and new network investments, Dönmez said.

The minister said that great progress has been achieved in the...